SA Ambulance Service responded to 15 snake bites during October, the highest number in any month for the past three years.

Chris Howie, an Operations Manager with SA Ambulance Service, said November to March was usually the most dangerous period for snake bites and urged people to be wary outdoors.

"Previously, the highest number of bites for any month in the past three years was 11, which occurred in December last year," Chris said.

"With the warmer weather we’re seeing an increase in snake activity, across both metropolitan and country areas.

"There were a total of 62 snake bites in South Australia during 2013. We’ve already seen 42 so far this year and summer is yet to come.

"There are simple, lifesaving tips you can follow if you or someone near you is bitten.

"Keep the patient, and especially any bitten limb, as still as possible and call triple zero (000) for expert emergency medical assistance.

"Calling 000 for an ambulance is the single most important thing you can do, as our emergency call takers will tell you how to perform life-saving first aid over the phone."

In the case of a snake bite, the patient should be kept still and a firm bandage should quickly be applied along the whole bitten limb.

"Firm bandaging along the entire length of the limb, including over the bite site, and keeping the limb as still as possible delays movement of the venom into the bloodstream," Chris said.

"If people don’t have a bandage available, items of clothing can be used to apply pressure over the bite site and limb.

"Use any cloth material that is capable of applying a firm and even compressing force over the bite area and limb.

"It is important not to take the original makeshift bandage off; just bandage over the top of it as soon as a proper bandage is available."

"It is important not to wash venom off a bitten area as it can be used to work out which type of snake had bitten the person and which treatment may be needed at hospital.

"With appropriate first aid applied immediately after being bitten, the number of snake bite fatalities can be reduced," he said.

On average, three people in Australia die as a result of snake bites each year.

Have a snake bite plan:

Signs and symptoms of snake bite may include:

What to do if someone is bitten by a snake: 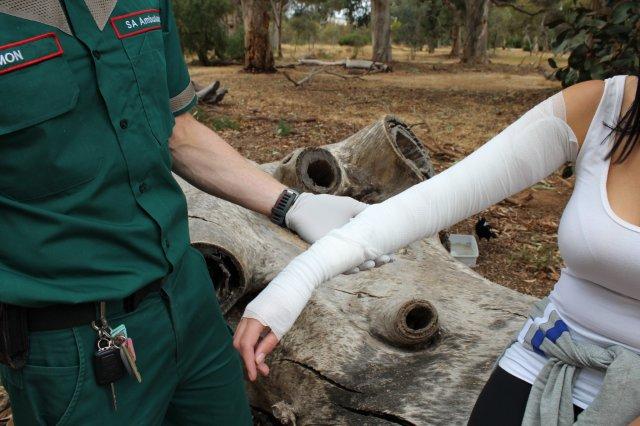